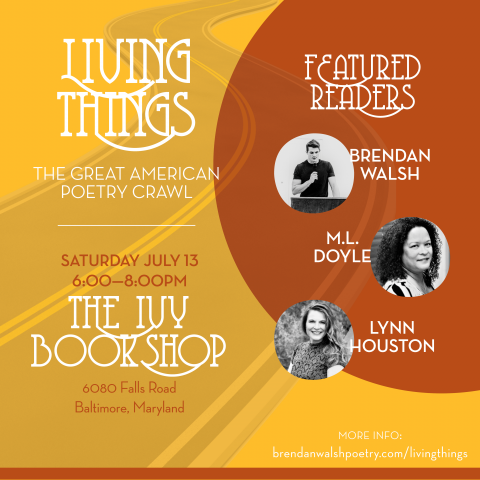 The Ivy welcomes Brendan Walsh, Lynn Houston, and M.L. Doyle for an immersive reading in exploration of the joy, contradiction, heartache and wonder of being!

Florida-based poet and educator Brendan Walsh brings his summer poetry tour to The Ivy Bookshop in Baltimore, Maryland. Join him and local authors Lynn Houston and M. L. Doyle for an evening of stirring literary work and performance.

‘Living Things: The Great American Poetry Crawl,’ sponsored by Sutra Press, is harnessing the fellowship of writing by connecting to independent literary communities up and down the East Coast. This reading tour stretches from Florida to Rhode Island; Walsh is also conducting interviews with local poets in each city, creating a video series that illustrates the reciprocal relationship between poetry and place.

Brendan Walsh has lived and taught in South Korea, Laos, and South Florida. His work has recently appeared in Glass Poetry, Indianapolis Review, Wisconsin Review, Baltimore Review, and other journals. He is the author of Make Anything Whole (Five Oaks Press), Go (Aldrich Press), Buddha vs. Bonobo (Sutra Press), and the only flesh to feed you (YellowJacket Press).

Lynn Marie Houston holds a PhD in English from Arizona State University and an MFA from Southern Connecticut State University. Her poetry book, The Mauled Keeper(Main Street Rag Publishing), was the first runner-up for the 2017 Eric Hoffer Award, a finalist for the Montaigne Medal, and the winner of the poetry category in the National Federation of Press Women’s national literary contest. In 2018, she was awarded an artist fellowship from the Connecticut State Office of the Arts.

M. L. Doyle calls on her years of serving as an Army Reservist to write about women in combat boots. Mary has written a three-book mystery series, two books of a planned three-book urban fantasy series and a four-novella erotic romance series. She co-authored the memoirs of two brave soldiers to ensure their stories keep their proper place in history. Her work with Spec. (Ret) Shoshana Johnson, an African- American POW of the Iraq War, won a nomination for an NAACP Image Award. She also co-authored with Brig. Gen (Ret.) Julia Cleckley the story of her rise through Army ranks from humble beginnings and despite great personal tragedy.

More on the tour can be found at brendanwalshpoetry.com/livingthings.