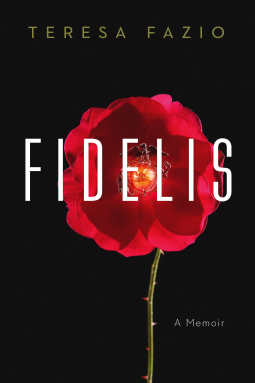 The Ivy is thrilled to welcome Teresa Fazio to celebrate the launch of her new memoir, Fidelis. Teresa will be joined in conversation with author Kate Germano. This event will take place on Zoom.

In 1998 Teresa Fazio signed up for the Marine Corps’ ROTC program to pay her way through MIT. After the United States was attacked on September 11, 2001, leading to the War on Terror, she graduated with a physics degree into a very different world, owing the Marines four years of active duty. At twenty-three years old and five foot one, Fazio was the youngest and smallest officer in her battalion; the combined effect of her short hair, glasses, and baggy camo was less Hurt Locker than Harry Potter Goes to War. She cut an incongruous figure commanding more experienced troops in an active war zone, where vulnerability was not only taboo but potentially lethal.

In this coming-of-age story set in the early days of Operation Iraqi Freedom, Fazio struggles with her past, her sense of authority, and her womanhood. Anger stifles her fear and uncertainty. A forbidden affair placates her need for love and security. But emptiness, guilt, and nightmares plague Fazio through her deployment—and follow her back home.

Teresa Fazio was a Marine Corps communications officer for four years, deploying once to Iraq. Her writing has been published in the New York Times, Rolling Stone, Foreign Policy, and the Nation as well as in the anthologies Retire the Colors: Veterans and Civilians on Iraq and Afghanistan; The Road Ahead: Fiction from the Forever War; and It’s My Country Too: Women’s Military Stories from the American Revolution to Afghanistan. Fazio holds a BS in physics from MIT, a PhD in materials science from Columbia University, and an MFA from the Bennington Writing Seminars.

Kate Germano was an officer in the United States Marine Corps for twenty years, retiring in July 2016. After being relieved from command of the only all female unit in the entire Department of Defense, she gained notoriety for taking a stand against the Marine Corps for gender bias and lowered standards and expectations for female recruits and Marines. Her writing has been published in national media outlets including the New York Times, Time magazine, U.S. News and World Report, and the Washington Post. She has also been featured on NPR, Vice News Tonight, CSPAN, and the PBS NewsHour.