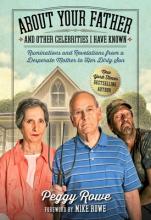 Peggy Rowe Virtual Book Launch: About Your Father and Other Celebrities I Have Known (In Conversation with Mike Rowe)

Thank you to everyone who joined us! We do not have a recording of this event, but please watch Mike and Peggy's Facebook pages to see what they're up to!

As we navigate these unprecedented times and find new ways to connect readers with authors, The Ivy Bookshop is delighted to host a special Zoom book event with Peggy Rowe moderated by her son, Mike, to celebrate the launch of her new book About Your Father (And Other Celebrities I Have Known).

Purchase an unsigned copy of About Your Father (And Other Celebrities I Have Known) from our online store here and you will be invited to attend this virtual event with Peggy and Mike on Wednesday, May 27, from 6:30-7:30 PM EDT. Once we’ve received your order, you will automatically be registered for the Zoom book event using the name and email address used to purchase the book. You will receive a confirmation email from The Ivy Bookshop's Zoom account (no-reply@zoom.us) containing the invitation details about joining the meeting—please be sure to add this email address to your contacts!

Please note: all book orders are fulfilled as direct-to-home shipments from our distributor's warehouse. Depending on your shipping preference, the book can take up to two weeks to arrive.

Space is limited.  To attend this event, purchase a book no later than May 26, 2020 at 5:00 PM EDT. We recommend purchasing a book as soon as possible to secure your spot.  Be sure to download Zoom before the event!

This Zoom book event will be recorded.  By attending, you consent to (a) the filming and your image, voice, and name being captured on video and/or audio, and (b) any such materials being used by The Ivy Bookshop, Peggy Rowe, and/or Mike Rowe for any purpose, including personal or book promotional purposes.

If you have any questions about the event, email as at info@theivybookshop.com. We look forward to seeing you!

Peggy Rowe is at it again—this time giving a hilarious inside look at growing up Rowe, both before and after Mike’s rise to fame.

Since the day they said, “I do,” Peggy’s previous “doting” lifestyle met with her husband John’s minimalist ways and became the backdrop for years of adventure and a quirky sense of humor because of their differences. From thoughts of wearing headlamps in the house to save energy, to squeezing out the last drop of toothpaste with a workbench vise, Peggy learned to pick her battles and celebrate the hilarity in each situation. Once their boys were born, woodstove mishaps and garbage dumping tales were the seed for Mike’s obsession with doing dirty jobs and the comical presence he is known for today.

As Mike rose to fame, Peggy was his biggest fan—who gave motherly advice and constructive criticism, of course. She baked cookies for Mike to take to Joan Rivers for a Christmas party hostess gift, and even wrote fan letters under faux names and mailed them from different cities to Mike’s producer.  By the time Mike hits it big, Peggy and John retire to face more adventures, with a lightning strike in their condo, an elderly friend who ate marijuana leaves, and entering into celebrity status by making Viva paper towel and Lee jeans commercials, plus so much more. Peggy’s stories relive the details that intrigue and entertain old and new fans alike. So if you want a bigger, even funnier take on the Rowe family, About Your Father and Other Celebrities I Have Known delivers.

Peggy Rowe used to have a hobby; she wrote articles and stories that appeared in newspapers and magazines. Thanks to her husband, John, three sons, and two parents who lived across the lawn for 40 years, there was no scarcity of material. After writing her first book, About My Mother, at the age of 80—which became a NYT bestseller—and her second book, About Your Father, at the age of 82, Peggy’s hobby has become a full-time job. “It took me 80 years to find my voice,” she says, “And now I can’t shut it up!” Peggy Rowe’s daily Facebook blog, “About My Mother,” has over 100,000 followers. She and her husband of sixty years are former schoolteachers and live in Baltimore, Maryland.

Mike Rowe is one of three sons born to John and Peggy Rowe, both teachers. He is a television host and narrator known for his work on the Discovery Channel series Dirty Jobs and the CNN series Somebody’s Gotta Do It. He hosts a Facebook series called Returning the Favor in which he finds people doing good deeds and does something for them in return. He also hosts the podcast The Way I Heard It with Mike Rowe, which he describes as “short stories designed specifically for the curious mind plagued with a short attention span.” Rowe has narrated programs for the Discovery Channel, The Science Channel, and National Geographic Channel such as Deadliest Catch, How the Universe Works, and Shark Week.