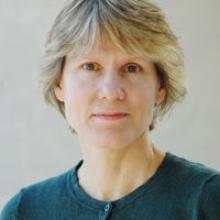 Join us for the latest installment of Writers CRIBS! Presented by the Enoch Pratt Free Library in partnership with the Ivy Bookshop!

Judith Krummeck and Pantea Amin Tofangchi will be in conversation about their experiences as writers, artists, and immigrants in today's world.

Judith Krummeck is a writer, a broadcaster, and an immigrant. Since emigrating from South Africa in the late 1990s she has been the evening drive time host for Baltimore’s classical music station, WBJC, 91.5 FM, and she is the author of two books. Beyond the Baobab is a collection of essays about her immigrant experience, and Old New Worlds is a biographical memoir that intertwines the immigrant stories of Judith's great-great grandmother from England to Africa and—almost two hundred years later—her own from Africa to America. Judith's screenplay, "A Chain of Voices," based on the novel of the same name by André Brink, is in development in Cape Town. Judith holds an MFA in Creative Writing & Publishing Arts from the University of Baltimore. She was awarded the Praise Singer Award for arts coverage by The Foundation for the Creative Arts in South Africa, and Baltimore Magazine has twice named her Baltimore’s Best.