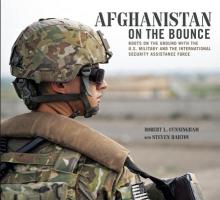 What was it like to serve in Afghanistan? That is the question civilians often ask returning servicemembers of the armed forces. Afghanistan: On the Bounce brilliantly conveys the full range of the troops' experiences on patrol, in combat, in the chow line, and in religious services through photographs, stories, diagrams, and removable ephemera. As a documentation/production specialist in Afghanistan, photographer Robert L. Cunningham accompanied soldiers of 40 different units on 132 combat missions, following them during their typical on-base routines as well as into hazardous situations. Here are detailed examinations of the service members' weapons, uniforms, vehicles, and gear, along with reflections on duty, insights into valor and heroism, and clear-eyed humor about life on deployment.

Robert L. Cunningham is a still photographer who has carried his cameras in over 24 countries. In 2011, he began working as a war correspondent. With multiple combat embedments spanning from 2011-2014, Robert worked throughout Afghanistan, primarily beside the U.S. Army's 1st Infantry, 10th Mountain, and 101st Airborne Divisions. Based in the US, he works worldwide on documentaries, feature, television, and marketing/advertising projects and is the recipient of numerous awards.