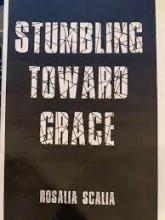 The Ivy Bookshop is thrilled to launch the debut story collection titled, Stumbling Toward Grace, by Baltimore writer, Rosalia Scalia. The launch features a reading of excerpts from a few of the stories, and author Susan Muaddi Darraj will lead a conversation about the collection.  This event will be hosted in-person on The Ivy's back patio.

Published by Unsolicited Press in Portland Oregon, the book contains 20 stories in 336 pages, most of them set in the Baltimore metro area. In these stories, familiar Baltimore characters come alive—a police officer struggling with PTSD, an elderly man wanting to reconnect with his estranged daughter, a wife unable to tolerate her husband’s paralysis after a shared trauma, a freelance nun who heals the sick outside an east Baltimore rowhome, and other tales of ordinary people striving to connect with their loved ones, despite personal flaws and fractured relationships.

Rosalia Scalia’s fiction has appeared or is forthcoming in The Oklahoma Review, North Atlantic Review, Notre Dame Review, The Portland Review, and Quercus Review, among many others. She holds an MA in writing from Johns Hopkins University and is a Maryland State Arts Council Independent Artist’s Award recipient. She won the Editor’s Select award from Willow Review and her short story in Pebble Lake was nominated for a Pushcart Prize. She lives in Baltimore City with her family.

Susan Muaddi Darraj’s short story collection, A Curious Land: Stories from Home, was named the winner of the AWP Grace Paley Prize for Short Fiction, judged by Jaime Manrique.   It also won the 2016 Arab American Book Award, a 2016 American Book Award, and was shortlisted for a Palestine Book Award. Her previous short story collection, The Inheritence of Exile, was published in 2007 by University of Notre Dame Press. In 2018, she was named a Ford Fellow by USA Artists. Susan also is a two-time recipient of an Individual Artist Award from the Maryland State Arts Council. She has also been awarded a Ruby’s Artist Grant from the Greater Baltimore Cultural Alliance and a grant from the Sustainable Arts Foundation. In 2019, she launched the viral #TweetYourThobe social media campaign to promote Palestinian culture. Later that year, she was named winner of the Rose Nader Award, by the American Arab Anti-Discrimination Committee (ADC), an award given by the Nader family to a person who “demonstrates an unwavering dedication and commitment to values of equality and justice.” In January 2020, Capstone Books launched her debut children’s chapter book series, Farah Rocks, about a smart, brave Palestinian American girl named Farah Hajjar.


The Ivy Bookshop - Back Patio
Login