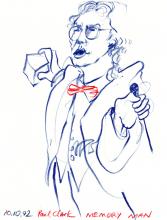 Drawing in the Dark: An Evening on the Patio to Celebrate Michael Iampieri and Baltimore Theater History

The Ivy presents an evening to celebrate the legacy of Michael Iampieri, who drew during live performances of theatre, dance, and music in Baltimore for more than 30 years (1978-2012). This evening will celebrate the book Drawing in the Dark, a collection of nearly 300 of Michael's drawings.

The evening will provide a wonderful chance to celebrate Michael and the Baltimore Theater Project more broadly.

To register for the free event, please click here!

To reserve your copy of the book, please email info@theivybookshop.com.

John C. Wilson is a Baltimore-based artist and educator engaged in visual, performing, and literary arts. Writing, curating, and designing Drawing in the Dark: The Art of Michael Iampieri brings together a lifetime of passions and experiences. John served for 28 years on the Theatre Project board of directors, five as the chair. He’s been an independent director bringing to the stage Kennedy’s Children, The Laramie Project, A Fierce Longing, and Warren. John is an independent curator, and coordinated the Himmelfarb Gallery at Maryland University of Integrative Health. He teaches book design in University of Baltimore’s MFA program in creative writing & publishing arts.

Philip Arnoult is the founder of Baltimore Theatre Project, which he directed from 1971-1990. Philip is also founder and current director of the Center for International Theatre. Philip was named a World Theatre Ambassador by UNESCO and is the recipient of many awards including the Polish Order of Merit for Culture and the Rosamund Guilder Award of the U.S. Center of the International Theatre Association.

Anne Cantler Fulwiler currently is chair of the Theatre Project board of directors. Anne was the producing director at Theatre Project from 2001-2012, and has served as development associate at the Mid Atlantic Arts Foundation. She lives in Baltimore with her husband Tucker.

Juanita Rockwell is a writer and director with over 100 performance projects produced on five continents. Artistic Director of Company One Theater (Hartford, CT) for 6 years and Founding Director of Towson University’s experimentally-focused MFA in Theatre (now Professor Emerita), her awards include a Fulbright, Marion Fellowship, Baltimore Ruby, funding from NEA, NPR, MSAC, and a dozen artist residencies.

About the artist and drawing instructor:

Douglas Johnson is a Baltimore artist who studied at Maryland Institute College of Art (MICA). His work explores new possibilities of water-based media: primarily watercolor, gouache, and ink. Figures that have a living presence, landscapes that stretch out for miles, expressed in paintings and drawings made with a spare economy of swift marks. It is this gymnastic precision in Johnson's brushwork and unbridled use of saturated color that make his paintings so recognizable. In addition to his accomplishments as a painter, he has been an active member of the theatre community as a writer, director, and producer of set designs for Annex Theater, Yellow Sign Theatre, Everyman Theater, Single Carrot Theatre, and the Baltimore Rock Opera Society.

Rick Novell is a premier headliner in the cruise and corporate industry. He began his performing career in Baltimore City at age fourteen. Only four years later, Rick formed the “All American Mini Circus” where he toured the world entertaining the troops for the  Department of Defence and USO. Rick later formed his unique “Variety in Motion” show, which won World Performance Awards in Canada and Japan. Rick’s juggling, unicycling, and freestanding ladder skills have been featured on TV and commercials in the USA, Japan, Australia and Canada.

Robert Hitz is a composer, pianist, and master teacher. He is the quintessential modern artist – his music spans genres and influences, and is open to all great musical ideas. Although classically trained at the Peabody Institute and Syracuse University, Robert now primarily plays and composes through improvisation.