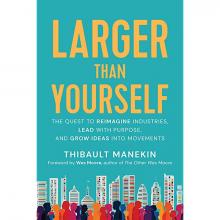 Thibault Manekin: Larger Than Yourself (in conversation with Chris Wilson)

The Ivy is thrilled to host the book launch for Thibault Manekin's debut, Larger Than Yourself: The Quest to Reimagine Industries, Lead with Purpose, and Grow Ideas into Movements. Thibault will be in conversation with Chris Wilson. This event will be held in-person, on The Ivy's back patio.

It's an age-old question: Why do some great ideas or inventions take off and soar while others never get off the ground? Today, with more and more young entrepreneurs seeking to incorporate social justice, economic equity, climate concerns, and communal health into their endeavors, the need for practical-yet-think-big answers is great. Thibault Manekin has a few. In 2002, eight years after the fall of apartheid, recent college graduate Manekin moved from his hometown of Baltimore to Durban, South Africa, on the strength of an idea: What if basketball could bridge even the deepest social divides? Despite enormous obstacles, such as the HIV/AIDS crisis, and fueled by support from figures including Nelson Mandela and the Dalai Lama, he proved that it could. Manekin then took the lessons he'd learned back to Baltimore, where he asked himself how the real estate industry could be reimagined to unite cities, empower communities, and launch powerful ideas. Larger Than Yourself tells this story but is about much more than Manekin himself. It also profiles the remarkable real-world change makers he has worked with, and the innovative practices he has instituted, in the profitable companies and nonprofit organizations he has helped to create. Manekin makes these methods accessible to all, meaningful to anyone, and inspirational to everyone with an idea, a hope, and a purpose-driven dream.

Thibault Manekin is a speaker, educator, entrepreneur, community organizer, and cofounder of Seawall. Soon after graduating from college, Manekin traveled to South Africa, where he combined his passion for bringing people together with a love of sports to help create Peace Players, a nonprofit with the mission of bringing together children from war-torn countries around the world through basketball and dialogue. He lives in Baltimore, Maryland.

Chris Wilson splits his time between Baltimore, Maryland, and New York City and works as a visual artist, author, film producer, and social justice advocate. Through his work, he investigates societal injustices, human relationships, and public policies. His book, the Master Plan, continues to inspire people from all walks of life. His artwork is collected and displayed internationally and his production company, Cuttlefish, has produced several successful films, including The Box which is being featured in the Tribeca Film Festival. He is also the founder of the Chris Wilson Foundation, which supports social entrepreneurs and prison education, including re-entry and financial literacy for returning citizens, as well as art-related programs.