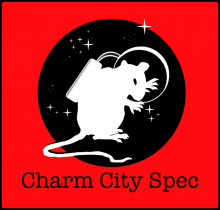 Come join us on the patio of The Ivy Bookshop on October 27th when these authors will read: John Appel, Scott Edelman, Tessa Gratton, Justina Ireland, Karlo Yeager Rodriguez, and A. C. Wise. Be forewarned: several of the readings will be appropriate to the spooky season. Also on offer: door prizes, snacks and beverages, Q&A, a mass signing, old friends and new!

John Appel volunteered to jump out of planes before he’d ever been in a plane; his friends and family say this sums up his approach to life pretty well. He writes science fiction and fantasy and the occasional tabletop RPG adventure. A lifelong Marylander, he lives in the Baltimore suburbs with his wife and children. He retired at the end of 2020 after decades as an information security and technology risk management professional. When not writing, rolling dice, or keeping the bad guys at bay, he enjoys rum and swords, but not both at the same time. John is a graduate of the Viable Paradise writing workshop. ASSASSIN'S ORBIT (REBELLION/SOLARIS 2021) is his debut novel.

Scott Edelman has published nearly 100 short stories in magazines such as Analog, The Twilight Zone, Postscripts, Absolute Magnitude, Science Fiction Review and Fantasy Book, and in anthologies such as You, Human, The Solaris Book of New Science Fiction, Crossroads, MetaHorror, Once Upon a Galaxy, Moon Shots, Mars Probes, Forbidden Planets. His poetry has appeared in Asimov’s, Amazing, Dreams and Nightmares, and others.

Tessa Gratton is the author of adult SFF titles The Queens of Innis Lear and Lady Hotspur from Tor Books, as well as the original fairy tales Strange Grace and Night Shine from McElderry Books. Her YA series and short stories have been translated into twenty-two languages. Though she has lived all over the world, she currently resides alongside the Kansas prairie with her wife.

Justina Ireland is the author of Dread Nation (Balzer + Bray/HarperCollins), a New York Times bestseller as well as the sequel Deathless Divide. Her earlier works include the fantasy young adult novels Vengeance Bound and Promise of Shadows (both Simon and Schuster). Justina also writes for the Star Wars franchise, including the books Lando’s Luck, Spark of the Resistance, and the upcoming A Test of Courage, part of the High Republic publishing initiative. She is the former co-editor in chief of FIYAH Literary Magazine of Black Speculative Fiction, for which she won a World Fantasy Award. She holds a BA from Armstrong Atlantic University and an MFA from Hamline University.

Karlo Yeager Rodríguez is a speculative fiction writer originally from Puerto Rico. He moved to Baltimore some years back, where he has run the Baltimore Science Fiction Society's open writing group since mid-2015. His fiction has appeared in Unlikely Stories, Nature, Uncanny, Beneath Ceaseless Skies and most recently in Speculative Fiction for Dreamers: A Latinx Anthology.After some guest appearances on Podside Picnic podcast, Karlo became its host. There, he explores the literature of the fantastic."

A.C. Wise was born and raised in Montreal, and currently lives in the Philadelphia area. Her short fiction has appeared in publications such as Uncanny, Tor.com, Shimmer, and multiple Year’s Best anthologies. Her fiction has won the Sunburst Award for Excellence in Canadian Literature of the Fantastic, and been a finalist for the Nebula Awards, the Sunburst Awards, the Lambda Literary Awards, and the Aurora Awards, while her work as a reviewer has been a finalist for the Ignyte Awards.