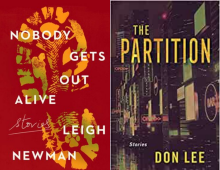 The Ivy is delighted to welcome Don Lee and Leigh Newman for a conversation to celebrate their forthcoming short story collections, both publishing in April 2022. This event will be help in-person, on our back patio.

Preorder Don Lee's The Partition from The Ivy here

Preorder Leigh Newman's Nobody Gets Out Alive from The Ivy here

Click here to register for the event (encouraged, but not required)

The Partition is an updated exploration of Asian American identity, this time with characters who are presumptive model minorities in the arts, academia, and media. Spanning decades, these nine novelistic stories traverse an array of cities, from Tokyo to Boston, Honolulu to El Paso, touching upon transient encounters in local bars, restaurants, and hotels.

Culminating in a three-story cycle about a Hollywood actor, The Partition incisively examines heartbreak, identity, family, and relationships, the characters searching for answers to universal questions: Where do I belong? How can I find love? What defines an authentic self?

Don Lee's new story collection, The Partition, will be published in April 2022 by Akashic Books. He is also the author of the story collection Yellow and the novels Country of Origin, Wrack and Ruin, The Collective, and Lonesome Lies Before Us. He has received an American Book Award, the Asian/Pacific American Award for Literature, and the Sue Kaufman Prize for First Fiction. He lives near Baltimore with his wife, the writer Jane Delury, and teaches in the MFA program in creative writing at Temple University in Philadelphia.

Set in Newman’s home state of Alaska, Nobody Gets Out Alive is a collection of dazzling, courageous stories about women struggling to survive not just grizzly bears and charging moose but the raw, exhausting legacy of their marriages and families. In “Howl Palace”—winner of The Paris Review’s Terry Southern Prize, a Best American Short Story, and Pushcart Prize selection—an aging widow struggles with a rogue hunting dog and the memories of her five ex-husbands while selling her house after bankruptcy. In the title story, “Nobody Gets Out Alive,” newly married Katrina visits her hometown of Anchorage and blows up her own wedding reception by flirting with the host and running off with an enormous mastodon tusk.

Alongside stories set in today’s Last Frontier—rife with suburban sprawl, global warming, and opioid addiction—Newman delves into remote wilderness of the 1970s and 80s, bringing to life young girls and single moms in search of a wilder, freer, more adventurous America. The final story takes place in a railroad camp in 1915, where an outspoken heiress stages an elaborate theatrical in order to seduce the wife of her husband’s employer, revealing how this masterful storyteller is “not only writing unforgettable, brilliantly complex characters, she’s somehow inventing souls” (Kimberly King Parsons, author of Black Light).

Leigh Newman’s memoir about her childhood in Alaska, Still Points North was a finalist for the National Book Critic Circle’s John Leonard prize. Her stories have appeared in Harper’s,The Paris Review, The Best American Short Stories 2020, One Story, Tin House, Electric Literature McSweeney’s Quarterly Concern and have been awarded the Pushcart and the American Society of Magazine Editor's fiction prizes. In 2020, she received f the Paris Review’s Terry Southern Prize for “humor, wit, and sprezzatura.” In addition to growing up in Alaska, she grew up in Homeland and attended Roland Park Country School (Go Reds!).