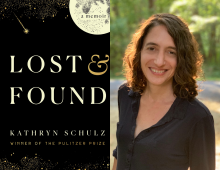 The Ivy is delighted to welcome Kathryn Schulz for a reading and discussion about her new memoir, Lost & Found. Kathryn will be in conversation with Elaine Weiss. This conversation will be moderated by Jennie Hann and held in-person on The Ivy's back patio.

Eighteen months before Kathryn Schulz’s beloved father died, she met the woman she would marry. In Lost & Found, she weaves the stories of those relationships into a brilliant exploration of how all our lives are shaped by loss and discovery—from the maddening disappearance of everyday objects to the sweeping devastations of war, pandemic, and natural disaster; from finding new planets to falling in love.

Three very different American families form the heart of Lost & Found: the one that made Schulz’s father, a charming, brilliant, absentminded Jewish refugee; the one that made her partner, an equally brilliant farmer’s daughter and devout Christian; and the one she herself makes through marriage. But Schulz is also attentive to other, more universal kinds of conjunction: how private happiness can coexist with global catastrophe, how we get irritated with those we adore, how love and loss are themselves unavoidably inseparable. The resulting book is part memoir, part guidebook to living in a world that is simultaneously full of wonder and joy and wretchedness and suffering—a world that always demands both our gratitude and our grief.

Elaine Weiss is a Baltimore-based journalist and author, whose feature writing has been recognized with prizes from the Society of Professional Journalists, and  her byline has appeared in many national publications. Elaine's most recent book, The Woman's Hour: The Great Fight to Win the Vote (Viking/Penguin) has won critical acclaim from the New York Times, Wall St. Journal, Christian Science Monitor, and The New Yorker, hailed as a "riveting, nail-biting political thriller" with powerful parallels to today's political environment. The Woman's Hour was a GoodReads Readers' Choice Award winner, short-listed for the 2019 Chautauqua Prize, and received the American Bar Association's highest honor, the 2019 Silver Gavel Award. Elaine is a frequent media commentator on the themes of women's political organization and modern voting rights, with recent interviews on NPR's All Things Considered, CBS Sunday Morning, and PBS American Experience. Her next book, Spell Freedom, will be published by One Signal/Simon & Schuster.

Jennie Hann earned her Ph.D. in English from Johns Hopkins, where she is presently a Fellow in the Writing Seminars. She's at work on a biography of the late poet Mark Strand and serves on the board of the National Book Critics’ Circle.