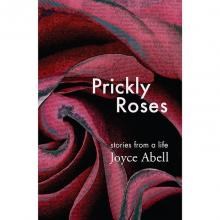 Prickly Roses: Stories from a Life is a collection of high-spirited, often humorous essays spanning the adventurous life of 93- year-old Joyce Abell. Frequently on her own from the age of three, she lived on a dairy farm, at a hotel in New Orleans, on a transatlantic ocean liner, in an Albanian palace, and came of age in a boarding house in Berkeley, CA. Among the characters in this book, you'll meet her Communist parents, Paul Robeson, the U.S. ambassador to Albania (her grandfather), and the great loves of her life.

Joyce Abell was born in 1925 in New York City and spent her childhood shuttled between parents and grandparents, living many places, from a farm in Connecticut to an embassy in Albania. After teaching anthropology and psychology in public high schools, she and her husband retired and moved to Rappahannock County, VA where they became organic farmers. Joyce was a founding member of Rappahannock County Community Theatre. In the early '90s she created and co-directed No Ordinary Person, a dramatic reading series highlighting autobiographical stories by local citizens, still running as of 2017. Her recent acting roles were the leads in Driving Miss Daisy and The Gin Game. Prickly Roses: Stories from a Life is her first book.