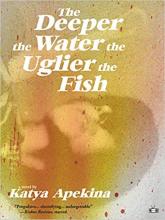 Katya Apekina: The Deeper the Water the Uglier the Fish

It’s 16-year-old Edie who finds their mother Marianne dangling in the living room from an old jump rope, puddle of urine on the floor, barely alive. Upstairs, 14-year-old Mae had fallen into one of her trances, often a result of feeling too closely attuned to her mother’s dark moods. After Marianne is unwillingly admitted to a mental hospital, Edie and Mae are forced to move from their childhood home in Louisiana to New York to live with their estranged father, Dennis, a former civil rights activist and literary figure on the other side of success. The girls, grieving and homesick, are at first wary of their father’s affection, but soon Mae and Edie’s close relationship begins to fall apart―Edie remains fiercely loyal to Marianne, convinced that Dennis is responsible for her mother’s downfall, while Mae, suffocated by her striking resemblance to her mother, feels pulled toward their father. The girls move in increasingly opposing and destructive directions as they struggle to cope with outsized pain, and as the history of Dennis and Marianne’s romantic past clicks into focus, the family fractures further.

Moving through a selection of first-person accounts and written with a sinister sense of humor, The Deeper the Water the Uglier the Fish powerfully captures the quiet torment of two sisters craving the attention of a parent they can’t, and shouldn’t, have to themselves. In this captivating debut, Katya Apekina disquietingly bends the lines between fact and fantasy, between escape and freedom, and between love and obsession.

Katya Apekina has published stories in The Iowa Review, Santa Monica Review, West Branch, Joyland, PANK and elsewhere, and has appeared on the Notable List of Best American Nonrequired Reading 2013. She translated poetry and prose for Night Wraps the Sky: Writings by and about Mayakovsky (Farrar, Straus, and Giroux, 2008), which was shortlisted for the Best Translated Book Award. She co-wrote the screenplay for the feature film New Orleans, Mon Amour, starring Elisabeth Moss, which premiered at SXSW in 2008. Born in Moscow, she currently lives in Los Angeles.

Appearing with Katya will be locally based writers Shannon Robinson and Katherine Noel.

Shannon Robinson’s work has recently appeared in The Iowa Review, Gettysburg Review, and Joyland. She has taught for Johns Hopkins, Stanford Continuing Studies, and Interlochen Center for the Arts, where she was Writer-in-Residence. She has received fellowships from Hedgebrook, the Canada Council for the Arts, and the Elizabeth George Foundation.
Katharine Noel’s first novel, Halfway House, was a New York Times Editors' Choice, winner of a Ken/NAMI Award for "outstanding literary contributions to a better understanding of mental illness," and winner of the 2006 Kate Chopin prize for fiction.  She has been the Writer in Residence at Claremont McKenna College and the Jones Lecturer at Stanford University, where she also held Wallace Stegner and Truman Capote fellowships. Katharine lives with her husband, the writer Eric Puchner, and their children in Baltimore, Maryland, where she teaches at Johns Hopkins University and is at work on a new novel.