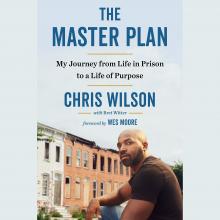 Chris Wilson: The Master Plan (in conversation with Wes Moore)

The inspiring, instructive, and ultimately triumphant memoir of a man who used hard work and a “Master Plan” to turn a life sentence into a second chance.

Growing up in a tough Washington, D.C., neighborhood, Chris Wilson was so afraid for his life he wouldn't leave the house without a gun. One night, defending himself, he killed a man. At eighteen, he was sentenced to life in prison with no hope of parole.

But what should have been the end of his story became the beginning. Deciding to make something of his life, Chris embarked on a journey of self-improvement--reading, working out, learning languages, even starting a business. He wrote his Master Plan: a list of all he expected to accomplish or acquire. He worked his plan every day for years, and in his mid-thirties he did the impossible: he convinced a judge to reduce his sentence and became a free man. Today Chris is a successful social entrepreneur who employs returning citizens; a mentor; and a public speaker. He is the embodiment of second chances, and this is his unforgettable story.

Wes Moore is an Army combat veteran, national bestselling author, and social entrepreneur. His first book, The Other Wes Moore, became an instant New York Times and Wall Street Journal bestseller as a story that conveys the importance of individual decisions as well as community support. He is also the host of “Beyond Belief” on the Oprah Winfrey Network and Executive Producer and host of “Coming Back with Wes Moore” on PBS.

Wes graduated Phi Theta Kappa from Valley Forge Military College in 1998 and Phi Beta Kappa from Johns Hopkins University in 2001.  He completed an MLitt in International Relations from Oxford University as a Rhodes Scholar in 2004.  Upon graduation, Wes served as a paratrooper and Captain in the United States Army, participating in a combat tour of duty in Afghanistan with the 82nd Airborne Division.

While a student at Johns Hopkins he founded STAND!, which works with Baltimore youth involved in the criminal justice system and still exists today. He has been featured by USA Today, People Magazine, “Meet the Press,” “The Colbert Report”, “The View,” MSNBC, and NPR, among many others.

More recently, Wes is now the Founder and CEO of BridgeEdU, an innovative college completion platform that addresses the college completion and career placement crisis by reinventing the Freshman Year in a way that engages students in real-world internships and service learning opportunities. He is also the author of The Work, to be released in January, which chronicles Wes’s journey to discover meaning in his work and how he found that meaning in service. Wes is committed to helping young people redirect their lives and supporting the parents, teachers, mentors and volunteers who care for, and work with, our nation’s youth.  A portion of the proceeds from sales of The Other Wes Moore are being donated to the U.S. Dream Academy and City Year.