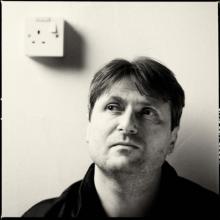 Simon Armitage is an award-winning poet, author, songwriter, playwright, and translator.The Unaccompanied(August 2017), a powerful new collection of poetry in which Armitage X-rays the weary but ironic soul of Britain with grace, is his most recent publication. Armitage is the author of numerous collections including Paper Aeroplane: Selected Poems 1989–2014 (2014); Seeing Stars (2010); Tyrannosaurus Rex Versus the Corduroy Kid (2006); The Shout: Selected Poems (2005), which was short-listed for the National Book Critics Circle Award; Kid (1992), which won the Forward Prize; and his first collection, Zoom! (1989), a Poetry Society Book Choice. His translation of Sir Gawain and the Green Night (2007) from Middle English was selected as a Book of the Year by both the New York Times and the Los Angeles Times. His other translations from medieval English include The Death of King Arthur(2011), which was awarded the Poetry Society Choice Hay Medal for Poetry, and Pearl (2016). Other awards Armitage has received for his poetry include a Lannan Award, the Ivor Novello Award for song-writing, BBC Radio Best Speech Programme, and the Keats-Shelley Prize for Poetry. He won the 2017 PEN America Award for Poetry in Translation and was awarded The Queens Gold Medal for Poetry in 2018. Armitage is Professor of Poetry at the University of Leeds and was elected to serve as Professor of Poetry at the University of Oxford for 2015-2019. This Spring he is also Holmes Visiting Professor at Princeton University.