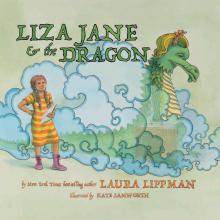 Come join us at the Pratt Library’s Light Street Branch for a special storytime with best-selling author Laura Lippman as she reads from Liza Jane & the Dragon.

Liza Jane believed she could find better parents. So she fired her mom and dad and hired the first applicant who came to the door—what could possibly go wrong?

And at first everything was fun. The dragon did whatever Liza Jane wanted him to do. But it turned out the dragon had only one response to all problems—opening his mouth and belching fire. Suddenly, people were scared of Liza Jane. The pizza deliveryman didn’t want to come to her house. No one wanted to play with her. And all that fire was very bad for the furniture.

Could Liza Jane have been wrong about what kind of qualities she wanted in a parent?

Laura Lippman is a New York Times bestselling novelist who has won more than twenty awards for her fiction, including the Edgar Award—and been nominated for thirty more. Since her debut in 1997, she has published twenty-one novels, a novella, a children’s book, and a collection of short stories. Her books have been translated into over twenty languages. LitHub named her one of the “essential” female crime writers of the last hundred years. She also has written for the New York Times, the Wall Street Journal, the Washington Post, Vulture, Real Simple, and T magazine. The film of her novel Every Secret Thing was produced by Frances McDormand and premiered at the Tribeca Film Festival, starring Diane Lane, Elizabeth Banks, and Dakota Fanning. Laura lives in Baltimore with her husband, David Simon, and their daughter.