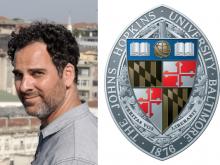 Humanities in the Village: Alessandro Angelini: Hands on the City: The Stuff of Imagination

Anthropologist Alessandro Angelini will read a selection from his upcoming book, Model Favela: Youth, Second Nature, and Rio de Janeiro, an ethnographic account about the politics of imagination. It is an up-close descriptive analysis of the relationship between play and reality, drawn from four years working and playing alongside a group of Afro-Brazilian working-class male youths who created a role-playing game in a hand-built model of Rio, constructed with painted bricks and found materials. Everyday urban experiences shape the game’s rules, but beyond standing as a mere reflection of reality, the game has changed it and its creators.

Alessandro Angelini is an assistant professor of anthropology at Johns Hopkins University. Through fieldwork in Rio de Janeiro, Caracas, Medellín, and New Orleans, he studies how building practices and cultural production shape political subjectivity in urban squatter settlements. He examines how such neighborhoods become objects of expertise and artistic expression.