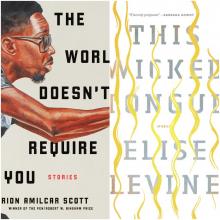 The World Doesn’t Require You:

Established by the leaders of the country’s only successful slave revolt in the mid-nineteenth century, Cross River still evokes the fierce rhythms of its founding. In lyrical prose and singular dialect, a saga beats forward that echoes the fables carried down for generations—like the screecher birds who swoop down for their periodic sacrifice, and the water women who lure men to wet deaths.

Among its residents—wildly spanning decades, perspectives, and species—are David Sherman, a struggling musician who just happens to be God’s last son; Tyrone, a ruthless PhD candidate, whose dissertation about a childhood game ignites mayhem in the neighboring, once-segregated town of Port Yooga; and Jim, an all-too-obedient robot who serves his Master. As the book builds to its finish with Special Topics in Loneliness Studies, a fully-realized novella, two unhinged professors grapple with hugely different ambitions, and the reader comes to appreciate the intricacy of the world Scott has created—one where fantasy and reality are eternally at war.

In moments of exile and self-exile, exodus and return, Elise Levine’s uncanny narratives lay bare the secret grammar of their characters’ psyches. An ill-tempered divinity-school candidate refuses to minister to a dying man’s wife; a couple fails to connect as they tour an ersatz cave in the south of France; holy women grieve in medieval England, and a pregnant runaway hitches a ride with a Church leader of dubious intentions. Propelled by their longing for pasts that no longer exist, these reluctant Adams and contemporary Eves confront the unspoken, the maligned, the abject aspects of their inner geographies, mining them for gems that glint and scatter in the light. Uncompromising and honest, lyrical and wry, This Wicked Tongue dares to tell the truth about the places we have come from and the new ones we might find.

Elise Levine is the author of the story collection This Wicked Tongue, the novels Blue Field and Requests and Dedications, and the story collection Driving Men Mad. Her work has also appeared in Ploughshares, The Gettysburg Review, and Best Canadian Stories, among others, and was a finalist for The Best Small Fictions 2018.

Rion Amilcar Scott is the author of the story collection, The World Doesn't Require You (Norton/Liveright, August 2019). His debut story collection, Insurrections (University Press of Kentucky, 2016), was awarded the 2017 PEN/Bingham Prize for Debut Fiction and the 2017 Hillsdale Award from the Fellowship of Southern Writers. His work has been published  in journals such as The Kenyon Review, Crab Orchard Review, and The Rumpus, among others.