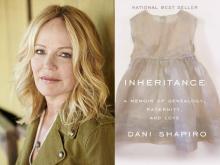 As part of the Berman Institute of Bioethics’ 25th Anniversary, Dani Shapiro will read an excerpt from her New York Times best selling memoir, Inheritance, followed by a moderated conversation with Dr. Ruth Faden. After discussing the ethical dimensions of the issues raised by her memoir, there will be a Q&A with the diverse medical and academic community, and a reception to follow.

What makes us who we are? What combination of memory, history, biology, experience, and that ineffable thing called the soul defines us?In the spring of 2016, through a genealogy website to which she had whimsically submitted her DNA for analysis, Dani Shapiro received the stunning news that her father was not her biological father. She woke up one morning and her entire history–the life she had lived–crumbled beneath her.

Inheritance is a book about secrets–secrets within families, kept out of shame or self-protectiveness; secrets we keep from one another in the name of love. It is the story of a woman’s urgent quest to unlock the story of her own identity, a story that has been scrupulously hidden from her for more than fifty years, years she had spent writing brilliantly, and compulsively, on themes of identity and family history. It is a book about the extraordinary moment we live in–a moment in which science and technology have outpaced not only medical ethics but also the capacities of the human heart to contend with the consequences of what we discover.

In addition to Inheritance, which was published in January 2019 by Knopf, Shapiro’s other books include the memoirs Hourglass, Still Writing, Devotion, and Slow Motion, and five novels including Black & White and Family History.

Along with teaching writing workshops around the world, Dani has taught at Columbia and New York University, and is the cofounder of the Sirenland Writers Conference in Positano, Italy.

In February of 2019, Dani launched an original podcast, Family Secrets, in collaboration with iHeartMedia. An iTunes Top 10 podcast, the series features stories from guests who—like Dani— have uncovered life-altering and long-hidden secrets from their families’ past.