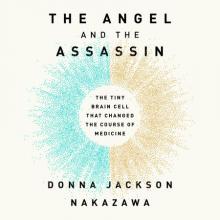 The Ivy is pleased to welcome Donna Jackson Nakazawa, who will be in conversation with WYPR's Sheilah Kast. They will be discussing the intersection of neuroscience, immunology, as well as celebrating the release Donna Jackson Nakazawa's newest book, The Angel and the Assassin: The Tiny Brain Cell That Changed the Course of Medicine. Following the reading, attendees are encouraged to enjoy a delicious wine tasting courtesy of Peter Wood of the French Paradox Wines.

Until recently, microglia were thought to be the brain’s housekeepers, helpfully removing damaged cells. But a recent groundbreaking discovery revealed them to be capable of terrifying Jekyll and Hyde behavior. When triggered—and anything that activates the immune system in the body can activate microglia—they can morph into destroyers, impacting a wide range of issues: from memory problems and anxiety to depression and Alzheimer’s. Under the right circumstances, however, microglia can be coaxed back into being angelic healers, able to repair the brain in ways that help alleviate symptoms and hold the promise to one day prevent disease.

A fascinating behind-the-scenes account of this cutting-edge science, The Angel and the Assassin also explores the medical implications of these game-changing discoveries. Award-winning journalist Donna Jackson Nakazawa unveils a breaking new unifying theory of disease: microglia-triggered brain “inflammation” plays a stunning role in the most intractable brain disorders of our time – depression, OCD, bipolar disorder, autism, schizophrenia, post-concussion syndrome, neurological autoimmune disease, and Alzheimer’s – and treatments designed to “reboot” microglia show promise in stopping the disease process.  She follows practitioners and patients on the front lines of treatments – from transcranial magnetic stimulation and intermittent fasting to neurofeedback and gamma light flicker therapy. She witnesses patients finding significant relief from pressing symptoms, and at least one stunning recovery, offering new hope to the tens of millions who suffer from mental, cognitive, and physical health issues.

Donna Jackson Nakazawa is the author of three previous books Childhood Disrupted, which was a finalist for the 2016 Books for a Better Life award, The Last Best Cure, and The Autoimmune Epidemic. For her written contributions to the field of immunity, she has received the AESKU award and the National Health Information Award, which recognizes the nation's best magazine articles on health. Jackson Nakazawa has appeared on Today, NPR, NBC News, and ABC News, and her work has appeared in The Washington Post, Health Affairs, Aeon, More, Parenting, AARP Magazine, and Glamour, and has been featured on the cover of Parade as well as in Time and USA Today. She blogs for Psychology Today and HuffPost. Jackson Nakazawa has been the recipient of writing-in-residence fellowships from the Virginia Center for the Creative Arts, Yaddo, and the MacDowell Colony. She lives with her family in Maryland.

Sheilah Kast is the host of On The Record, Monday-Friday, 9:30-10:00 am.  Originally, she hosted WYPR's  Dupont-Columbia University award-winning Maryland Morning with Sheilah Kast from 2006 - October 2015.  She began her career at The Washington Star, where she covered the Maryland and Virginia legislatures, utilities, energy and taxes, as well as financial and banking regulation.  She learned the craft of broadcasting at ABC News; as a Washington correspondent for fifteen years, she covered the White House, Congress, and the 1991 Moscow coup that signaled the end of the Soviet empire.  Sheilah has been a substitute host on NPR’s Weekend Edition Sunday and The Diane Rehm Show.  She has launched and hosted two weekly interview shows on public TV, one about business and one about challenges facing older people.