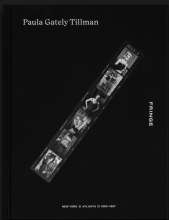 Paula Gately Tillman’s photographs have been exhibited nationally and internationally and are represented in numerous public and private collections, including the Permanent Collection at the Baltimore Museum of
Art; the Sheridan Libraries, Special Collections, Johns Hopkins University; New York University’s Fales Library; and the LGBTQ Collection in the Stuart A. Rose Manuscript, Archives, and Rare Book Library at
Emory University.

Her book, Fringe, a compendium of black and white photographs she captured in the 1980s and 1990s of the underground punk rock, fashion, music, and drag queen scenes in New York City and Atlanta, has won
several prestigious awards, including the following:

Many of the young performers whose photographs appear in Fringe would go on to have noteworthy careers—RuPaul, now the world’s most famous drag queen; Tish and Snooky Bellomo, founders of Manic
Panic, an internationally distributed line of hair colors; Nelson Sullivan, a video artist whose videos of life on the Downtown scene are now housed in the Fales Library at New York University; and Fenton Bailey and
Randy Barbato, Hollywood film makers and founders of World of Wonder Productions. Gately Tillman studied photography in Aspen, Colorado, under the guidance of internationally published photographer Eileen Lewis. She moved to New York to take classes at the School of Visual Arts and to pursue a career as a photographer. In 1984 a chance meeting with Brant Mewborn, senior editor of Rolling Stone, led to her introduction to the musicians, drag queens, fashion divas, and other collaborators that she would photograph, many of whose images appear in Fringe. Her book also includes a short memoir, “Behind the Lens,” which chronicles the whirlwind of circumstances that carried her from one surprising experience to the next, culminating with an introduction to her future husband, LeRoy E. Hoffberger. Fringe was published in December 2018 with an artist’s edition that included never-before-seen photographs as well as prints of exhibited images. Five of the photographs from Fringe were curated into A Look Back: 50 Years After Stonewall, July 12–August 11, 2019, at Fort Gansevoort, a gallery in the Meatpacking District in New York City.

Three of Gately Tillman’s black and white photographs from her Venice is a Dream: A Childhood Memory will be on view in Focal Points: Women Advancing the Aperture, February 7–April 25, 2020, at the Delaware
Contemporary in Wilmington, Delaware. She is also exploring a new portfolio series and writing accompanying text.

Kristen Hileman is an Independent Curator based in Baltimore and currently in residency at The Delaware Contemporary, Wilmington. She is also the founder of Kristen Hileman Art Advisory, LLC. Hileman served as Head of The Baltimore Museum of Art’s Department of Contemporary Art from 2009 through 2019, where she oversaw the reinstallation of the museum’s renovated contemporary wing in 2012, initiated numerous acquisitions to diversify the collection, and presented exhibitions featuring an array of artists, among them the Guerrilla Girls, Njideka Akunyili Crosby, Mary Reid Kelley and Patrick Kelley, Sarah Oppenheimer, Dario Robleto, Anri Sala, and Tomás Saraceno. Her most recent BMA projects included Meleko Mokgosi: Acts of Resistance, Lizzie Fitch / Ryan Trecartin, DIS: A Good Crisis and John Waters: Indecent Exposure, a large- scale retrospective of that influential cultural figure’s visual arts career. Throughout her time at the BMA, Hileman foreground artists with ties to Baltimore including Seth Adelsberger, Maren Hassinger, Sharon Hayes, Jimmy Joe Roche, Sterling Ruby, and Sara VanDerBeek. Jo Smail: Flying with Remnant Wing, her survey of the career of the distinguished painter and Maryland Institute College of Art professor, will open at the BMA in spring 2020. From 2001 through 2009, Hileman worked at the Smithsonian Institution’s Hirshhorn Museum and Sculpture Garden, Washington, D.C., where she organized the first full career retrospective of Anne Truitt, bringing new attention to the important DC-based abstractionist. At the Hirshhorn, Hileman also co-curated the international film and video exhibition The Cinema Effect: Realisms and led projects featuring John Baldessari, Cai Guo-Qiang, Cyprien Gaillard, Mario Garcia Torres, Oliver Herring, Jim Hodges, and Wolfgang Tillmans. She has taught at Johns Hopkins University, George Washington University, and the Corcoran College of Art and Design and is a frequent visiting critic and lecturer at colleges and universities.