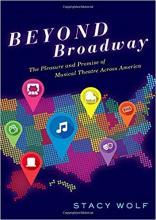 The Ivy is pleased to welcome Stacy Wolf and Susan McCully to discuss Beyond Broadway: The Pleasure and Promise of Musical Theatre Across America.

Stacy Wolf is a theatre professor and director of the Program in Music Theater at Princeton University, where she teaches classes on gender and race in the American musical, including a course on the musicals of Stephen Sondheim.  She is the author of Changed for Good: A Feminist History of the Broadway Musical, A Problem Like Maria: Gender and Sexuality in the American Musical, and co-editor of The Oxford Handbook of the American Musical.  Wolf's latest book, Beyond Broadway: The Pleasure and Promise of Musical Across America, explores how the Broadway musical theatre repertoire finds new life at local venues across the country, including summer camps, high schools, community theatres, and afterschool programs.

Playwright and performer Susan McCully is an Assistant Professor of Theatre at UMBC, where she also serves as the Artistic Director of the GrrlParts new play festival. Her play All She Must Possess, commissioned by RepStage in 2017, broke box office records at the theatre. She was a featured playwright for the DC Women’s Voices Theatre Festivals in 2015 and 2017. Kerrmoor and Inexcusable Fantasies have been produced at both the New York and the Prague International Fringe Festivals and across the United States, including at the Philadelphia Gay and Lesbian Theater Festival. Girls on a Dirt Pile, produced by UMBC Theatre, was selected for participation in the Kennedy Center American College Theatre Festival 2020.