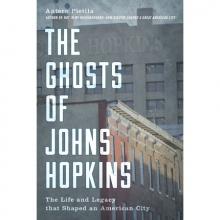 Meet the Author: Antero Pietila, The Ghosts of Johns Hopkins

Join us at Pratt’s Roland Park Branch for an opportunity to meet Antero Pietila, author of The Ghosts of Johns Hopkins.

Antero Pietila's thirty-five years with The Baltimore Sun included coverage of the city's neighborhoods, politics and government. He also served seven years as a correspondent in South Africa and the Soviet Union. The Ghosts of Johns Hopkins reflects the whole spectrum of those experiences. A native of Finland, where he graduated from Tampere's School of Social Sciences, Pietila became a student of urban racial rotations during his first visit to the United States in 1964. He later obtained a Master of Arts degree at Southern Illinois University, Carbondale.

He is also the author of Not in My Neighborhood: How Bigotry Shaped a Great American City (2010). He co-authored Race Goes To War: Ollie Stewart and the Reporting of Black Correspondents in World War II (2015) and contributed to The Life of Kings: The Baltimore Sun and the Golden Age of the American Newspaper (2016).