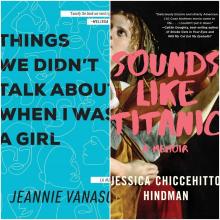 The Ivy welcomes writers Jessica Hindman and Jeannie Vanasco for a conversation surrounding their books Sounds Like Titanic and Things We Didn’t Talk About When I was a Girl.

In Sounds Like Titanic a  young woman leaves Appalachia for life as a classical musician—or so she thinks.

When aspiring violinist Jessica Chiccehitto Hindman lands a job with a professional ensemble in New York City, she imagines she has achieved her lifelong dream. But the ensemble proves to be a sham. When the group “performs,” the microphones are never on. Instead, the music blares from a CD. The mastermind behind this scheme is a peculiar and mysterious figure known as The Composer, who is gaslighting his audiences with music that sounds suspiciously like the Titanic movie soundtrack. On tour with his chaotic ensemble, Hindman spirals into crises of identity and disillusionment as she “plays” for audiences genuinely moved by the performance, unable to differentiate real from fake.

Jeannie Vanasco has had the same nightmare since she was a teenager. She startles awake, saying his name. It is always about him: one of her closest high school friends, a boy named Mark. A boy who raped her.

When her nightmares worsen, Jeannie decides—after fourteen years of silence—to reach out to Mark. He agrees to talk on the record and meet in person. "It's the least I can do," he says.

Jeannie details her friendship with Mark before and after the assault, asking the brave and urgent question: Is it possible for a good person to commit a terrible act? Jeannie interviews Mark, exploring how rape has impacted his life as well as her own. She examines the language surrounding sexual assault and pushes against its confines, contributing to and deepening the #MeToo discussion.

Jessica Chiccehitto Hindman has “performed” on PBS, QVC, and at concert halls worldwide. Her writing has appeared in the New York Times Magazine, McSweeney's, Brevity, and Hippocampus. She holds a BA in Middle Eastern studies and an MFA in creative nonfiction writing from Columbia University, and a PhD in English from the University of North Texas. She teaches creative writing at Northern Kentucky University and lives in Newport, Kentucky.

Jeannie Vanasco is the author of The Glass Eye: A Memoir (Tin House Books, 2017). Her work has appeared in The Believer, the New York Times Modern Love, Tin House, and elsewhere. She lives in Baltimore and is an assistant professor at Towson University.