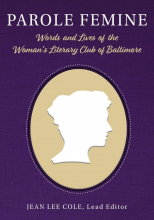 Join us at the Baltimore County Library’s Pikesville Branch to hear Jean Lee Cole her book Parole Femine: Words and Lives of the Woman's Literary Club of Baltimore.

For over fifty years, members of the Woman's Literary Club of Baltimore met every Tuesday afternoon between October and May to share their writing with the goal of getting it into print. And how they succeeded. Between 1890-1941, over a thousand publications emerged from the members of the WLCB. Their novels and historical works appeared in the catalogues of the nation's most respected publishers; their poems and stories filled the pages of magazines including Harper's, the Atlantic, and Ladies' Home Journal. Their plays were performed in Baltimore, in Washington, DC, and even on Broadway.

Yet in less than one hundred years, this astounding group of women--and their writings--have been all but forgotten, the result of changing literary tastes and the establishment of a male-dominated literary canon. This volume gives them new pride of place. Parole Femine: Words and Lives of the Woman's Literary Club of Baltimore is organized thematically and includes over a hundred works from all of the published authors of the Club active between 1890-1920. This rich sampling of writings by Baltimore women at the turn of the twentieth century reveals wide-ranging intellect, interests, and social and political investments that are held together by a common local perspective; it shows that Baltimore literary culture did not exist solely in the smoky clubs, restaurants, and newspaper offices frequented by the likes of Edgar Allan Poe, H. L. Mencken, and F. Scott Fitzgerald.