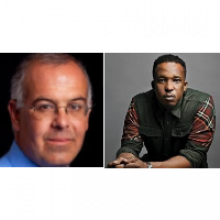 An Evening with David Brooks and D. Watkins

Join us at the Pratt Library’s Central Branch to hear an enlightening discussion between writers David Brooks and D. Watkins.

Weave, Thread, and Enoch Pratt Free Library are partnering to host an interactive conversation that will challenge participants to reimagine Baltimore as the protagonist in an upcoming novel.  David Brooks and D. Watkins will guide a discussion that asks attendees to reflect on the city’s traits, talents, and traumas in order to draw conclusions about how we, as a community, can come together and strengthen connections in order to improve our heroine's future.

David Brooks is an Op-Ed columnist for The New York Times, a position he began in September 2003, as well as the Executive Director of Weave: The Social Fabric Project at the Aspen Institute. He is a commentator on “PBS NewsHour,” NPR’s “All Things Considered,” and NBC’s “Meet the Press.” Brooks is the author of Bobos in Paradise: The New Upper Class and How They Got There and The Social Animal: The Hidden Sources of Love, Character, and Achievement. In April 2015, he came out with his fourth book, The Road to Character, which was a No. 1 New York Times best-seller. He is a member of the American Academy of Arts and Sciences.

D. Watkins is editor-at-large for Salon. He’s also a college professor at the University of Baltimore and founder of the BMORE Writers Project. His work has been published in The New York Times, The Guardian, Rolling Stone, and other publications. Watkins is the author of The Cook Up: A Crack Rock Memoir and The Beast Side: Living (and Dying) While Black in America. He lives in East Baltimore.

Free, no registration required. Seating is first come, first serve. Please note that marking interest does not reserve a seat. Parking is $5 in the Franklin Street Garage after 5pm.