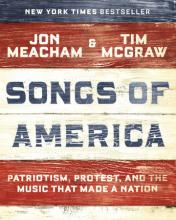 Jon Meacham unfortunately had to cancel and has been replaced by Thomas Friedman.

Join us at the Pratt Library’s Central Branch to hear Jon Meacham discuss his new book Songs of America.

Beginning with the battle hymns of the revolution, and taking us through songs from the defining events of the Civil War, the fight for women’s suffrage, the two world wars, the Great Depression, the civil rights movement, the Vietnam War, and into the twenty-first century, Meacham and McGraw explore the songs that defined generations, and the cultural and political climates that produced them. Readers will discover the power of music in the lives of figures such as Harriet Tubman, Franklin Roosevelt, Eleanor Roosevelt, and Martin Luther King, Jr., and will learn more about some of our most beloved musicians and performers, including Marian Anderson, Elvis Presley, Sam Cooke, Aretha Franklin, Bob Dylan, Duke Ellington, Carole King, Bruce Springsteen, and more.

Songs of America explores both famous songs and lesser-known ones, expanding our understanding of the scope of American music and lending deeper meaning to the historical context of such songs as “My Country, ’Tis of Thee,” “God Bless America,” “Over There,” “We Shall Overcome,” and “Blowin’ in the Wind.” As Quincy Jones says, Meacham and McGraw have “convened a concert in Songs of America,” one that reminds us of who we are, where we’ve been, and what we, at our best, can be.

Jon Meacham is a Pulitzer Prize–winning biographer. The author of the New York Times bestsellers Thomas Jefferson: The Art of Power, American Lion: Andrew Jackson in the White House, Franklin and Winston, Destiny and Power: The American Odyssey of George Herbert Walker Bush, and The Soul of America, Meacham holds the Carolyn T. and Robert M. Rogers Chair in the American Presidency and is a distinguished visiting professor at Vanderbilt University. He is a contributing writer to The New York Times Book Review, a contributing editor to Time, and a fellow of the Society of American Historians.