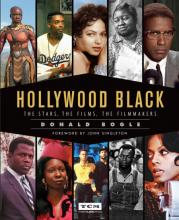 This event has been cancelled.

The films, the stars, the filmmakers-all get their due in Hollywood Black, a sweeping overview of blacks in film from the silent era through Black Panther, with striking photos and an engrossing history by award-winning author Donald Bogle.

Donald Bogle is one of the foremost authorities on African Americans in films and entertainment history. His nine books include the groundbreaking Toms, Coons, Mulattoes, Mammies, and Bucks; the award-winning Bright Boulevards, Bold Dreams; the bestselling Dorothy Dandridge: A Biography; and Brown Sugar, which the author adapted into a PBS documentary series. Bogle has appeared on numerous television and radio programs; and in such documentaries as Spike Lee's Jim Brown: All-American. He was a special commentator and consultant for Turner Classic Movies' award-winning series Race and Hollywood. Bogle teaches at the University of Pennsylvania and New York University's Tisch School of the Arts. His most recent book is HOLLYWOOD BLACK: The Stars, the Films, the Filmmakers.

Books will be available for purchase at a signing after the program.